Our Seeds of Prosperity programme is helping tea workers and their families improve their health and wellbeing through more nutritious, diverse diets.

Around half a billion people across the globe are smallholder farmers, who rely on modest plots of land to provide food for their income and themselves.

However, to earn a living, they often sell their best crops. This leaves them with a monotonous diet that usually contains too many starchy foods such as rice, maize and wheat.

While inexpensive and filling, this kind of diet lacks important vitamins and minerals. And that carries several health risks, including decreased resistance to infections and impeded brain and body development.

Malnutrition also has a knock-on economic effect. Research estimates that adults who were malnourished as children earn at least 20% less on average than those who weren’t*, and national economies lose, on average, 10% of GDP annually due to malnutrition** as a result of early deaths and decreased productivity.

To help tackle this issue, we joined forces with the Global Alliance for Improved Nutrition (GAIN) and IDH (the Sustainable Trade Initiative) to develop a programme called Seeds of Prosperity, which promotes the consumption of nutritious foods and a diverse, balanced diet.

Together, we have recently implemented the programme at Unilever Tea Tanzania, reaching over 6,500 plantation workers and local tea farmers and, in turn, their families. And the results are promising.

Those taking part report improved diets, a better understanding of how to use their budget to buy healthier foods and greater awareness of nutrition within their families. Management believes that the programme has contributed to the decreased cases of anaemia in the local hospital.

Over a quarter of the world’s population suffers from anaemia, which is primarily caused by an iron-deficient diet. This results in persistent fatigue and weakness, and can lead to more serious health conditions, particularly in women.

As Abdallah Hamadi, Unilever Tea Tanzania’s Operations Excellence Manager, says: “Improving the health of the farmers in our value chain is a moral responsibility, but it also secures essential supplies, expands the market for our products and increases the resilience of our business model. Without a healthy workforce, we can’t have a healthy business.”

“Poor quality diets are the greatest driver of disease globally. Ensuring individuals have a varied diet with the right nutrients can be transformative for people, businesses and economies,” adds Lawrence Haddad, Executive Director of GAIN. “It is great to see Unilever demonstrating that companies can support nutritious diets for workers in their supply chains as a core part of sustainable business.”

How the programme works

Seeds of Prosperity informs workers and their families about diverse diets and why they matter. It aims to increase the number of food groups they consume daily, improving their intake of essential vitamins and minerals. It also provides seeds so households can cultivate vegetable gardens and fruit trees.

The programme reinforces messages about the importance of nutrition through posters around the workplace and at key focal points in the community. It also includes reminder messages on payslips, which are important documents for the workers.

Trained ‘educators’ then pass on these messages to raise awareness in the wider community and bring about additional change, for example, with mothers and with children in schools.

This approach is clearly working and maybe even reaching further than we anticipated. As Welfare Manager Dickson Mseti says: “The most rewarding part was when I visited a local restaurant and they were speaking about food groups. They were not part of the programme, but it shows the message is getting through and spreading.”

From pilot project to transformational change

Since starting life as a pilot project in India in 2016, we have now implemented Seeds of Prosperity in our tea supply chains in Kenya, Malawi and, most recently, Tanzania. The results have been positive, with significant improvements in nutrition and hygiene practices in most farmer groups that have taken part.

To date, the programme has reached over 300,000 people. Given its successful societal impact, we’re now working on scaling the project further to bring about transformational change across the tea sector.

“Through the Seeds of Prosperity programme, we have brought more nutritious diets to 300,000 people in India, Kenya and Tanzania,” says Jordy van Honk, Global Director of Agriculture Commodities at IDH. “We are proud to have worked with Unilever and GAIN to demonstrate the potential for scale for the tea sector to bring more nutritious diets to tea workers and farmers.” 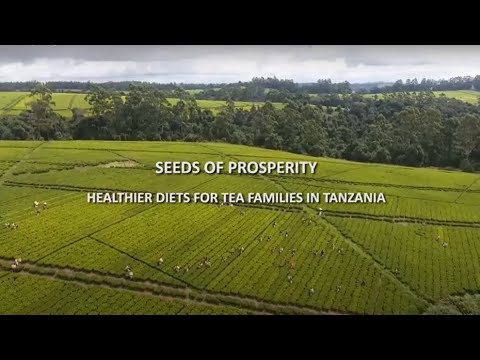